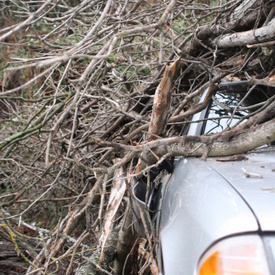 West Hempstead, NY — Four people were killed in a car accident when a vehicle slammed into trees and cut the car in half along the Long Island parkway Monday morning, October 8, 2012, around 4 a.m., the Huffington Post reported.

According to police, the late-model Subaru driven by 17-year-old Joseph Beer of Queens, who only had a learner’s permit, was the sole survivor of the wreck. Beer apparently failed to negotiate a curve in the road, causing him to crash into the woods.

The four passengers inside the car were thrown from the vehicle on impact. Their identities have not been released.

Beer was transported to an area hospital for medical treatment.

The accident is still under investigation and it is unknown if drugs and/or alcohol played a role.