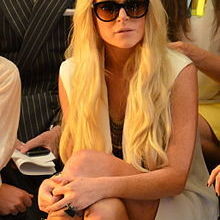 New York, NY — Actress Lindsay Lohan is in the headlines once again. The actress was arrested for leaving the scene of an accident early on Thursday, September 20, 2012, after allegedly clipping a pedestrian in downtown Manhattan just after midnight, TMZ reports.

According to law enforcement, Lohan was pulling in to park her Porsche Cayenne near the Dream Hotel in downtown New York City, when she allegedly hit a man in his 30s at a very low rate of speed.

A passenger in the SUV reportedly got out and checked the vehicle of damage while Lohan went inside the hotel.

Cops arrested Lohan inside the hotel around 2:30 a.m., after someone alerted the authorities of the accident.

Lohan was reportedly taken to the police station where she was fingerprinted, photographed and booked for leaving the scene of an accident, which is a misdemeanor charge. She was released with a desk appearance ticket.

Alcohol was allegedly not a factor.