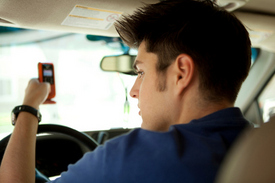 The law in New York State regarding cell phone use was changed on July 12, 2011. This law, which became effective on November 1, 2011, extended the prohibition against drivers using cell phones while driving, to include a prohibition against reading, writing, playing a game or sending a text message while driving. See Vehicle and Traffic Law section 1225-d. The use of a hands free cell phone for telephone calls is permitted by this law. Drivers are exempt from the provisions of this section if the call or text is made regarding an emergency situation to an emergency response operator, a hospital, a physicians’ office, a health clinic, an ambulance company or corps, a fire department, a fire district, a fire company or a police department. All police, fire and emergency services personnel are exempt from the prohibitions of this law.

The law in New York states that there is a rebuttable presumption that a driver who is holding a cell phone in a conspicuous manner is using it in violation of the law. This presumption, while rebuttable, makes it very difficult for a driver to defend an allegation of violation of VTL section 1225-d. The fine for a violation of this law is $150.00, reports Mr. Reiter a New York City pedestrian accident lawyer.

The New York VTL, like other laws around the country, arose, in recognition of the risks of accidents from distracted driving caused by cell phone use. It has been estimated, by many studies nation-wide, that the risk of accident due to the level of distraction caused by texting is the same or greater than the risk associated with drunk driving, constituting a major public health danger. An article published by the Suffolk University Law Review (2005), Vol. 39, p. 233, and cited by the Court in The People of the State of New York v. Campanaro, 19 Misc.3d 1116(a), concluded that the ‘rise in cellular phone use by drivers has caused a swell in accidents because… the risk of accident [is] four times greater when [a] driver [is] using a cell phone” (id. p. 238).

A recent case in New Jersey has addressed a slight twist to the issue of texting while operating a motor vehicle. This case involved a New Jersey college student who was exchanging text messages with her boyfriend while he was operating a motor vehicle seconds before he crashed into a motorcycle, causing grave injuries, including leg amputations of both driver and passenger of the motorcycle. The plaintiff sued the operator of the motor vehicle, and his girlfriend who sent the text messages. While this case has brought much needed public attention to the dangers of texting while driving, the Judge dismissed the claim against the girlfriend, stating that it would be unfair to place the blame for causing the crash on her.

Jonathan C. Reiter, a New York City injury lawyer, who has handled many motor vehicle, motorcycle and pedestrian accidents, states the following: “Distracted driving, from cell phone use, and in particular, texting while driving, is highly dangerous and has been banned by the State of New York. Drivers who violate this provision in New York, face stiff penalties and fines, and multiple violations may lead to license suspensions. Should a driver who is distracted through texting, cause an accident, one can rest assured that they will be held liable for their negligence in causing those injuries.”