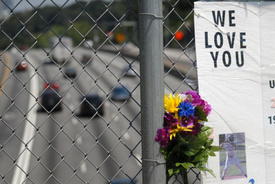 Fort Lee, NJ — A teenager was killed while on his way to a Sweet 16 party when he popped his head out of a hatch in the roof of a party bus near the George Washington Bridge on Friday, August 31, 2012, reports NYDailyNews.com.

According to reports, St. Francis Prep student Daniel Fernandez, 16, was on a double-decker bus with 65 other teens while they were on their way to a Sweet 16 party, when the accident occurred.

While clowning around, Fernandez stuck his head out of a hatch in the roof when the bus was approaching an overpass, and his head was hit in the underside of that overpass.

The security guard aboard the bus reportedly warned the teens multiple times to stay away from the rooftop hatch.

No other teens reportedly sustained any injuries.

Fernandez was rushed to Hackensack University Medical Center for treatment of severe head trauma, but was pronounced dead shortly after 6:45 p.m.

The remaining teens were taken to a nearby Port Authority administration building where they were questioned and released to their parents.

The teens were reportedly checked for alcohol prior to boarding the bus and were not served any alcohol while they were on the bus.