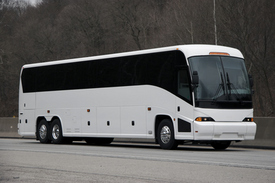 According to reports, the bus was traveling too fast for the wet conditions, which caused the driver to lose control of the bus. The bus, which is owned by Star Tag Inc., hit a center median barrier on I-95, veered right over three lanes and slid about 500 feet along an outer barrier before it came to a stop.

Responding emergency crews rushed 24 people, including the driver—who was ejected from the bus—to area hospitals for medical treatment. No one reportedly had serious injuries.

Charges have not been immediately filed.

The bus company, Star Tag Inc., reported has received four citations for unsafe driving in the past two years. In addition, every recorded inspection has results in vehicle maintenance violations.