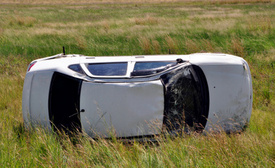 According to police, a speeding Mercedes collided with a Honda, which caused the Mercedes to hit the center divider and overturn several times. Two passengers in the Mercedes were ejected from the vehicle.

Responding emergency crews rushed the two eject passengers, who are from the Bronx, to an area hospital where they were later pronounced dead.

The deceased were identified as Tony Fortune, 46, and Shanikka Hunter, 28.

The driver and two other passengers in the Mercedes were hospitalized as well. The driver of the Honda was treated and released.