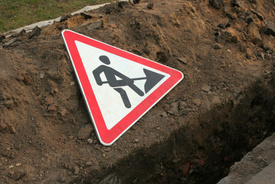 The 29-year-old worker, who remains unidentified, suffered severe head trauma when the trench collapsed, which buried him in the collapsed wall.

Responding emergency crews rushed the injured worker to Staten Island University Hospital, where his injuries proved fatal and he was pronounced dead.

His identity is being withheld at this time.

The city Department of Buildings said the department has issued a stop-work order for the site.

Investigators with the U.S. Occupational Safety and Health Administration (OSHA) are expected to arrive at the scene to conduct an investigation.

The contractor will be cited for violations including working without a permit and failing to shore up the trench.