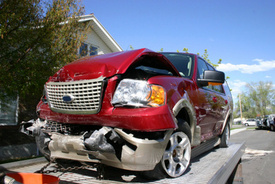 According to Lawrence Township police, the school bus was on its way to Slackwood Elementary School when it was making a right turn onto Slack Avenue from the southbound side of Brunswick Pike when a Ford Expedition hit the bus from behind.

Two of the 31 students on board the bus, driven by Timothy Young, 50, of Ewing Township, complained of pain following the crash. Responding emergency crews and a nurse examined the injured students. They were not transported to a hospital for further treatment.

The driver of the SUV, Andrew Paden, 29, of West Windsor Township also complained of pain and was treated at the scene. Paden declined further treatment at a hospital.

Paden was issued a ticket for carless driving and failing to wear a seatbelt.