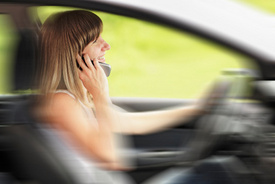 Trenton, NJ—The Assembly Appropriations Committee unanimously approved a new bill that would make it easier to convict drivers of vehicular homicide or assault by auto when they kill or injure someone while using a cellphone, Newsday reports.

The measure provides that the illegal use of a cellphone while driving can be considered driving recklessly, which must be found in order to convict someone of vehicular homicide or assault.

“Taking your eyes off the road even for a few seconds to check your cellphone could make the difference between life and death, and for some of these families, it did in the most tragic way,” said Assemblyman Charles Mainor, a Newark police detective and chairman of the Assembly Law and Public Safety Committee to Newsday. “Enough is enough.”

Under current laws, it is hard to hold motorists criminally accountable when they killed or injure someone while using a cellphone—whether its talking or texting.

The bill now will move to the full Assembly.