SUV Driver Killed After Being Hit by an LIRR Train 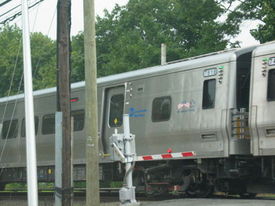 According to officials, the LIRR train had originated at Penn Station at 3:15 a.m., with 31 people on board when it crashed into the late model Dodge Durango.

MTA officials revealed that the SUV was found under the eighth car of the train. While its unknown how this happened, it appears that the train passed over the vehicle.

The vehicle caught fire and burnt the driver beyond recognition. The identity of the victim is unknown at this time, but officials revealed that it is a man. The SUV is registered to a woman.

It is unknown how the vehicle ended up on the tracks. The crossing gates were working properly and were lowered at the time of the accident.

None of the passengers on the train were injured.

Investigations into the fatal train accident are underway.