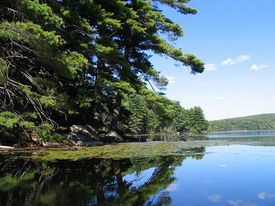 Fort Lee, NJ—A 16-year-old boy was killed after he plummet from a cliff at Palisades Interstate Park in New Jersey around 9:40 p.m., Friday, June 8, 2012, WPVI.com reports.

According to officials, the Fort Lee teen was with a 16-year-old Edgewater girl when he fell in the park’s Fort Lee area, which is located just north of the George Washington Bridge.

The girls told police that she and the victim were walking when he had fallen backward from the cliff. The teen was reportedly past a safety railing near the edge of the cliff when he fell.

Rescue efforts took longer than expected because of the remote location and various hazards in that area.

It is unknown what caused the teen to fall.

The death is not considered to be suspicious at this time, but it is still under investigation.