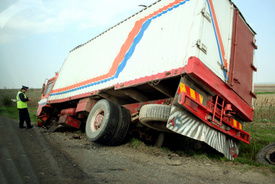 Police officials believe that the accident may have been caused when one of the vehicles was changing lanes. However, the accident is still under investigation.

The tour bus was transporting 50 people from New York City to Washington D.C. at the time of the crash. Responding emergency crews evaluated all of the passengers at the scene and reported that there were “no significant injuries.”

The driver of the tractor-trailer was taken to Christiana Hospital for treatment of minor injuries. The driver’s identity has not been released.

The front end of the tractor-trailer reportedly sustained heavy damage from the wreck.