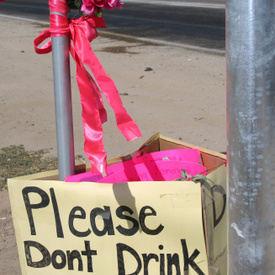 According to reports, Ralph Politi Jr., 49, was standing near his truck when a Toyota Camry driven by Vanessa E. Brown, 32, of Parsippany, veered off the street and hit Politi. The vehicle continued for about 60 feet through the parking lot of an auto parts store before hitting several vehicles and coming to a stop.

Politi was killed in the crash. He was reportedly the chairman of the East Hanover Community Partnership and was a well-known local figure.

Police charged Brown with driving while intoxicated and second-degree vehicular homicide. Brown is being held in the Morris County jail in lieu of a $100,000 bail.