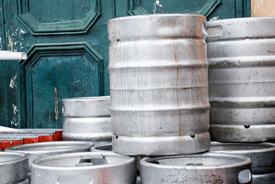 Portsmouth, NH — An accident at the Redhook Brewery in Portsmouth killed an employee when a keg exploded. The fatal workplace accident occurred Tuesday morning, April 24, 2012, just after 7 a.m., WMUR.com reported.

According to officials, Ben Harris was pressuring kegs with air as part of a cleaning process when a keg exploded into two pieces. Harris was struck in his chest and head by those pieces.

Fire officials stated that Harris sustained serious injuries to his chest and head as a result. He reportedly barley had a pulse and went into cardiac arrest.

Harris was rushed to Portsmouth Regional Hospital where he succumbed to his injuries and was pronounced dead.

Investigators with the U.S. Occupational Safety and Health Administration (OSHA) are looking into the fatal workplace accident.

“We are saddened by the tragic event that occurred at the Portsmouth brewery this morning resulting in the death of one of our employees,” Andy Thomas, Redhook’s president of commercial operations, said in a written statement. “Our deepest sympathies go out to his family.”