18 people were injured after scaffolding on a Harlem building 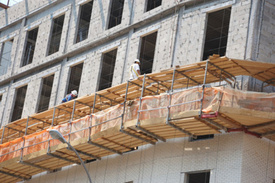 On Tuesday, September 20, 2011, 18 people were injured after scaffolding on a Harlem building fell atop a city bus that was transporting them, reports New York City injury lawyer Jonathan C Reiter. According to reports from the NYPD and FDNY, the accident occurred at approximately 9:30 am at 301 West 125th St., near Frederick Douglass Boulevard.

New York City injury lawyer Jonathan C Reiter relates that approximately 30 people were aboard the bus at the time of the accident. Eight of the 18 injured were passengers aboard the bus, and transported to St. Luke’s Hospital, according to police.

Harlem injury attorney Jonathan C Reiter explains the scaffolding fell from a five-story brick building that was being demolished. A police spokesperson further explained that preliminary accounts of the Harlem accident stated that bricks from the building fell onto the scaffolding, knocking it down.

New York City Construction Accident Lawyer – Jonathan C Reiter reports a spokesperson from the Department of Buildings verified the demolition project had the required permits, but that the department received a complaint on September 7. The spokesperson elaborated that inspectors sent to the site found nothing below standards.

New York City injury attorney Jonathan C Reiter explains that demolition projects require many steps to secure safety for workers and bystanders. It is the job of the demolition operators to ensure the proper planning, equipment and steps are executed in order to prevent damages and injuries from serious accidents such as falling debris.

*Leading New York City injury attorney Jonathan C. Reiter states if you or a loved one has been injured or killed in a demolition or construction accident, you may be entitled to compensation for your injuries and damages. Located in the Empire State Building, with more than thirty years of experience litigating the multifaceted claims of demolition and construction accident victims and their families, contacting New York City injury lawyer Jonathan Reiter with regard to your particular personal injury or wrongful death case may help you obtain the compensation you deserve.