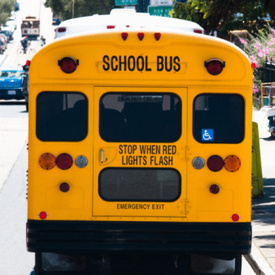 The boy was unharmed, but relatives are seeking answers from school administrators. Child safety advocates and the Miami injury lawyers at Grossman Roth say the case highlights the continuing need for measures to better protect youngsters using school transportation.

“When the lives of children are at stake, we need to be absolutely certain that child safety really is coming first,” says Andrew Yaffa, the lawyer spearheading the wrongful death lawsuit against the owners of Katie’s Kids Learning Center in Delray Beach, for Grossman Roth the Florida wrongful death attorneys.

In August 2010, Haile spent more than seven hours alone in one of the child care facility’s vans, ultimately succumbing to temperatures that reached more than 130 degrees. “The rules that are already in place must be followed—and we need new ones to supplement them. That a driver can walk off a bus or van without realizing that there is still a child strapped in a seat is a real cause for alarm—and reform,” Yaffa said.

While it is still unknown what, if any, regulations were violated in the 6-year-old’s case, investigators found numerous failings at Katie’s Kids in the wake of Haile’s death. The facility did not maintain proper—and required—attendance and transportation logs, and Katie’s Kids employees did not conduct a visual sweep of the day care vehicle before and after transporting children.

The driver of the van, Amanda Inman, and the facility’s former director, Petra Rodriguez, are currently facing charges of aggravated manslaughter of a child, report the Miami injury lawyers.

In the more recent incident, the 6-year-old, who is a special needs kindergartner at Dania Beach Elementary School, was picked up from his Hollywood, Fla., home at 7:15 a.m. on May 23 and apparently didn’t get off the school bus when it arrived at the school.

Relatives of the boy say he is autistic and has limited communication skills. They contend that the driver should have checked all the seats before leaving the bus. “He could be killed; he could be dead,” the boy’s grandmother, Erna Smith, told WSVN-TV. “This is sheer negligence on the part of the driver,” she said.

As a precaution, the boy’s mother took him to the hospital to have him checked, but he was fine, relatives reported.

The school board has said that it will review the case—and make sure it doesn’t happen again.

*This news story was brought to you by the Florida wrongful death attorneys and Miami injury lawyers at Grossman Roth, who for three decades have been fighting for—and coming through for—those needlessly injured by the negligence of others — helping clients obtain the recovery they deserve for personal injury and wrongful death lawsuits.