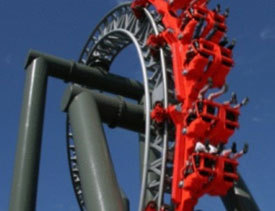 (Miami Injury Lawyers News) – For most theme park visitors, amusement park rides live up to the billing: They’re exciting and memorable and, most important, they’re safe. But among the thrills there will invariably be accidents, some of them tragic and some entirely preventable.

While most rides are well designed and maintained, others fall short of safety standards. Negligence—by ride manufacturers, park owners and even ride operators—can play a role, too. The result: injury, wrongful death and ruined lives.

The Miami child safety lawyers at Grossman Roth, P.A. have seen this all too often. They’ve worked with the family of Teagan Marti, a 13-year-old Florida girl severely injured in July 2010, when she fell 100 feet from a ride in Wisconsin that simulated a free fall. A ride operator had released Teagan from her harness before checking to see whether a safety net had deployed below her. It hadn’t and Teagan suffered 10 fractures in her spine, a crushed pelvis, loss of blood to her head and chipped teeth. Her first month in the hospital, she was unable to sit up or eat solid food. Since then Teagan has worked tirelessly to recover.

Teagan’s progress is a testament to her will and inner strength. But her predicament is a tragic demonstration of the negligence and carelessness of those entrusted with her safety, report the Miami injury lawyers at Grossman Roth.

The injury lawyers at Grossman Roth, which has helped many families recover in catastrophic personal injury and child safety cases, obtained a confidential settlement with Extreme World, the ride’s owner. It has helped Teagan continue her rehabilitation. But there are too many stories like Teagan’s—and too many other people who need assistance.

In just the first few months of 2011, the Miami wrongful death attorneys at Grossman Roth have seen even more amusement park accidents—some resulting in the death or severe injury of a child. Among them:

• In April, a 3-year-old boy was killed after falling from a kiddie roller coaster at the Go Bananas family amusement center in Norridge, Illinois. Early reports indicate that the child may have managed to free himself from the ride’s safety restraint, which begs the question: How well designed is a safety restraint that can be removed by a 3-year-old child?

• Also in April, two children suffered serious injuries after a sudden, strong gust of wind blew a bounce house up into the air while the children were inside it. The inflatable attraction flew across three lanes of traffic before coming to a stop on the side of a road. Miraculously, the children are expected to make a full recovery.

• In March, a 46-year-old man died after he fell from a roller coaster at the Houston Livestock Show and Rodeo. Witnesses said he fell as the ride, the Hi-Miler, banked in a sharp turn some 30 feet in the air. As he fell, the victim struck and broke the ankle of a passerby.

• Also in March, a miniature train at Cleveland Park in Spartanburg, South Carolina, derailed and overturned on its first run of the season, killing a 6-year-old boy and injuring 28 other passengers. The ride, named Sparky the Family Train, was designed to operate at a maximum speed of just 10 miles per hour.

As these tragic events demonstrate, even rides that run at relatively slow speeds and feature safety restraints can see serious—even deadly—accidents. While the best prevention, of course, is safe design and operation; parents need to be vigilant in observing—and reporting—any unsafe conditions they notice. As a law firm experienced in amusement park ride accidents, the Miami injury lawyers at Grossman Roth recommend the following best practices for safety:

• Choose rides with restraints that fit a child’s body and can’t be easily removed.

• Remember that minimum height requirements are set by ride manufacturers, not a safety board or agency. Often, the stated minimum height is too low. Play it safe and add a healthy margin.

• Observe the condition and operation of the ride. If anything looks unsafe, report it. And skip the ride.

As summer approaches, amusement parks are gearing up for a season packed with adventure and thrills. The vast majority of guests will enjoy their experience safely. But not everyone will. According to the old saying, Accidents will happen. But some accidents don’t have to. Be vigilant, be safe, and when in doubt, pick another attraction, recommend the Miami injury lawyers.

This backgrounder was brought to you by the child safety and Miami injury lawyers, Grossman Roth, who for three decades have been fighting for—and coming through for—those needlessly injured by the negligence of others — helping clients obtain the recovery they deserve for personal injury and wrongful death lawsuits.