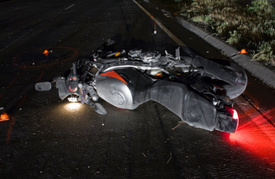 Sayreville, NJ – A motorcycle crash along Route 9 Tuesday, September 7, 2010, proved fatal after the driver was thrown from his bike, as reported by the Asbury Park Press. The Old Bridge man lost control of his motorcycle at approximately 12:30 a.m., near Bordentown Avenue, as stated by Sayreville police.

Manpreet Singh, 27, was pronounced dead at the scene. Singh and a passenger were traveling north on Route 9 when the motorcycle struck a curb, according to investigators. The motorcycle then hit a fire hydrant and struck a second curb. Singh’s body was thrown approximately 275 feet from the point of first impact, as reported by Detective Matthew Bandurski. The cause of death for Singh was labeled as head trauma.

The passenger, Alex Tsytsenia, 20, of South River, suffered non-life threatening injuries. He was treated at the scene and later transported to Robert Wood Johnson University Hospital in New Brunswick. Both men were wearing state-approved helmets.

Police were still investigating the cause of the crash. Officer John Ziola and Sgt. John Bartlinski were reportedly heading the investigation.