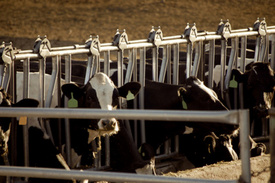 Hamilton, MI – The U.S. Department of Justice filed a request for a permanent injunction against Scenic View Dairy of Hamilton, Michigan, its president and three managers on Tuesday, August 31, 2010. The FDA announced that the complaint, which was issued on behalf of the U.S. Food and Drug Administration, is based on allegations that the firm sold dairy cows for human consumption that contained illegal antibiotic residues in edible tissues.

The complaint was filed in the U.S. District court for the Western District of Michigan. It claims the defendants sold cows for slaughter that were treated with drugs that the FDA did not approve for use.

According to the press release, “Between 2001 and 2010, the FDA notified the defendants of its inspection findings on at least eight occasions, and USDA sent Scenic View at least 11 letters regarding illegal tissue residues.”

The use of antibiotics in animals raised for human consumption increases human resistance to the products. It can also cause reactions in people with allergies.