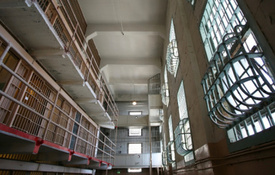 Rockland, ME – An Augusta man accused of raping a woman at knifepoint inside her home in Camden was charged on Wednesday, August 25, 2010 with victim tampering, as reported by Bangor Daily News.

Bradley Lemay, 44, a convicted rapist, was indicted in July for gross sexual assault, aggravated assault, criminal threatening, aggravated criminal trespass, burglary and eluding an officer. He has been incarcerated at Knox County Jail since June.

According to the criminal complaint, which was filed at Knox County Superior Court by Camden police Officer Michael Geary, the man “did induce, or cause, or attempt to induce or cause” the alleged victim to “withhold testimony, information or evidence, or testify falsely.”

The officer reported that Lemay, while in jail, sent a letter to his brother in July asking if he would contact the victim and influence her not to testify against Lemay, or to give testimony. Instead, Lemay’s brother contacted police.

Bangor Daily News explained that tampering with a victim is a Class B Crime. It is a felony that is punishable by up to 10 years in prison and up to $20,000.