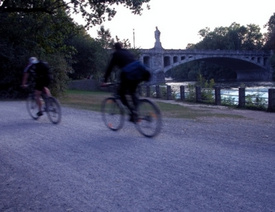 Baltimore, MD – A series of attacks on cyclists traveling in blocks bordered by North and Guilford avenues and Charles and 25th streets has raised concern among police and city planners who are trying to create a “bike boulevard,” as reported by the Baltimore Sun.

While police arrested three people in connection with two bike robberies in the past month, an attack on a cyclist Wednesday, August 18 proved the issue has not been completely handled. Michael Byrne was pushed from his bike by three young men Wednesday and left with a bruised rib as one of the assailants rode away on his bicycle.

Byrne reported his bike was relatively old, but was worth about $300 to $400.

A new search for suspects has begun.

Maj. Ross Buzzuro, the commander of the Northern District of Baltimore said, “We knew the arrests couldn’t completely quell the problem,” adding that they “have increased deployment.”

Attacks over the past few months have included harassment, rock throwing and robberies. Many were not reported to police, but discussed over social media sites such as Facebook. Nate Evans, the city’s pedestrian planner, told The Baltimore Sun he has heard many stories of attacks along the bike route. He said most attacks occur during the evening hours, between 5:30 and 11:30 p.m.

One cyclist who opted to remain anonymous said the area of Lower Charles Village has always been dangerous at night, referring to the zone as “a no-man’s land.” He said he was a victim to an attack two years ago.

Police said descriptions of the attackers has been vague.