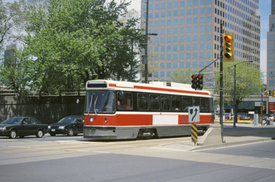 Pittsburgh, PA – Port Authority officials reported a woman was hit by one of their busses Tuesday, August 17, 2010, as reported by WPXI.com. The pedestrian was struck by the Port Authority bus near the intersection of 5th and Bellefield avenues in Oakland at approximately 4 p.m.

Port Authority spokesman Jim Ritchie said a 61C bus stopped at the intersection and as the driver pulled away from the stop, a woman walked in front of the bus. The driver could not stop the bus in time to avoid hitting her.

Ritchie reported the woman was conscious after the accident. She was taken to UPMC Presbyterian Hospital to be treated for a head injury.

As is the Port Authority standard, the bus driver will be on suspended duty with pay, pending the outcome of the investigation.

Neither the driver of the bus, nor the woman were identified.