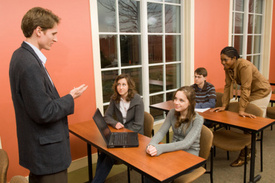 Roselle Park, NJ – The family of a teenage girl filed a lawsuit Monday, August 9, 2010, against the Roselle Park school board and other school officials, alleging a board member’s son sexually abused the girl after he served as a substitute teacher in 2009, as reported by The Star-Ledger.

The lawsuit, filed in Superior Court in Morris County, alleges that board members and district employees engaged in nepotism by hiring a board member’s son without properly screening him.

Nickolas Genovese, a student at Rutgers at the time of the alleged assault, met the teen last year while working as a substitute teacher at Roselle Park High School.

He previously pleaded guilty in Superior Court in Union County to a criminal charge of sexual contact, which left him with two years of probation.

The civil suit alleges that Genovese, now 20, sent the 15-year-old girl nude pictures and pornographic messages between November and December of 2009. After the series of pictures and texts, Genovese snuck into the girl’s home to have sex with her while her parents slept.

While Genovese’s criminal defense lawyer maintains the relationship was consensual and the student lied about her age, the civil lawsuit states the girl needs psychological therapy because of the events and “has been subjected to public harassment, ridicule and torment by web postings from her school-mates and peers.”

The suit further claims that the girl’s “high school experience has been irreparably ruined and taken from her.”