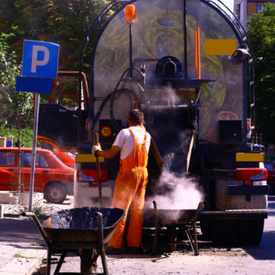 Cambria County, PA – A motor-vehicle accident in Dean Township between two pickups and dump truck left a man partially covered in molten asphalt and injured another on Tuesday, August 10, 2010, as reported by WPXI.com.

Authorities reported the accident happened after an asphalt truck collided with two pickups.

Authorities explained the carrier truck tipped over as a result of the collision. It crushed one pickup’s cab and pinned the driver inside. Then the asphalt began pouring out of the dump truck and into the pickup truck’s cab.

Police reported the driver of the crushed truck was buried up to his waist in 300-degree blacktop after a three-vehicle accident. The Pittsburgh Post-Gazette reported he was transported via helicopter to West Penn Hospital.

Emergency officials have credited a construction crew from Charles J. Merlo Inc. with saving the man’s life. They rushed to the scene to quickly shovel him out and keep him conscious.

The driver of the asphalt truck was transported to Altoona Hospital after the crash to be treated for his injuries.

Neither party’s name were released, nor were their conditions. The motor-vehicle accident remains under investigation.