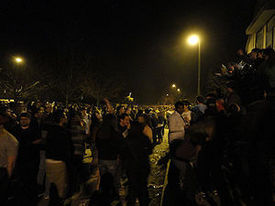 Hartford, CT – The family of a University of Connecticut junior who was killed by a blow to the head from a 19-year-old man during a UConn event is seeking justice for their son by pleading for a life sentence for the man who killed him. The family is also planning to sue the University of Connecticut for its failure to provide a safe environment for the student, as reported by the Hartford Courant.

On April 23, 2010, Jafar Karzoun was struck one time in the head by Edi Rapo, a 19-year-old Manchester Community College student. Witnesses related the sound of the punch to that of a baseball bat. Karzoun hit the ground outside a plaza of restaurants on North Eagleville Road. The incident happened during UConn’s Spring Weekend, a university-sponsored celebration for students.

Karzoun had several scholarships with the University of Connecticut and was honored as a New England Scholar, with a grade point average of 3.7 or higher. He was athletic, a swimmer and runner, and as a Muslim, did not drink.

He was a Management Information Systems student and had recently received the Treibick Scholarship from the Department of Operations and Information Management.

Karzoun’s advisor delivered the recent award to him as he lay on his hospital bed in a coma.

The police reports on the incident are lacking, to say the least. According to the Courant, a two and one-half page report in Rapo’s file states that Rapo initially denied punching Karzoun. He later admitted to the assault.

A shorter report was released when Rapo’s charges were upgraded. This report has conflicting information on the color shirt Rapo was wearing. At first, the report claims Rapo was wearing a dark, designer T-shirt. It later says he had on a white shirt with the dark tee draped over his shoulder. Police later found a brown, Luis Vuitton T-shirt in the bushes near the assault scene.

There is little information on the events that lead to the lethal punch.

Witnesses and police have told the Karzouns that there was some sort of verbal clash that happened on the first night of Spring Weekend, but the situation was diffused.

The Karzouns believe the situation later escalated with the help of alcohol and drugs.

The family’s attorney told the press, “What started it all was, one of the kids with Jafar was walking one way and…they bumped shoulders. Something like that. And all it takes is some alcohol, or drugs, and what’s a little thing that a sensible person would brush off escalates into something else.

He elaborated on the familly’s plans to sue the university, “This Spring Weekend went form a presumably quiet, happy get-together of UConn students to what has become really a dangerous weekend of drug abuse, alcohol abuse and violence, and has become a magnet for non-students to come to UConn. We believe UConn was well aware of this and did not take appropriate measures to make it safe.”

Rapo faces assault and manslaughter charges, among others. His attorneys declined comment.

Basem Karzoun, Jafar’s father, said, “I would like to see justice to our son… And justice to me is Edi Rapo goes behind bars for the rest of his life. We’ve got to fight for Jafar to the end. We want Jafar to rest in peace.”