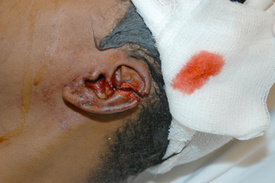 New York, NY – A well-known New York drag queen was arrested Sunday, August 8, 2010, for allegedly attacking a patron at a weekly party at High Bar on 48th Street and biting the ear off the man, as reported by Gawker.com and New York Daily News. James Leahy, known for his outrageous clothing and extreme personality was arraigned on two counts of first-degree assault “with intent to disfigure another person seriously and permanently.” He was released on his own recognizance.

The victim is Ronnie Brown, 25, told reporters, “I reached for my ear and it was not there. It looks like a dog mangled it.” Brown is a model and now worries he will lose work over the disfigurement.

Leahy, a promoter for Aids Walk New York, claims the incident was self-defense.

Brown told the Gawker, “While I’m speaking to my ex, Jane (Leahy’s stage name) starts saying obscene things to me. I told him he was a liar and he then threw a glass in my face leaving me scarred on my right side. Then the confrontation started. We were on the floor and I saw him go for my ear where my earring was but didn’t think twice about it until he pulled away with blood in his mouth and someone said my ear was bleeding…”

Leahy did not return calls to the New York Times. His employers reported he is on paid leave.

If Leahy is convicted of the felony assault charges, he faces up to 25 years in prison.