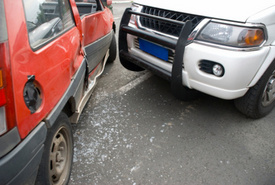 Kensington, NH – A two-vehicle accident on Route 108 in Kensington, NH on Thursday, July 29, 2010, left seven children with injuries, as reported by WMUR.com.

Police reported a Jeep was carrying all seven children as it passed through the intersection of Routes 108 and 150 when a Ford Taurus that was making a left turn struck it. The Jeep then rolled over into a parking lot, where it then collided with a parked car.

The children were aged from one to 12-years old. While none were seriously injured, four were taken to a hospital in Newburyport, Mass. According to WMUR, the remaining passengers and the driver of the Jeep, Brenda Cullen, were taken to Exeter Hospital, located in Exeter, NH. One witness described a young girl with a “pretty bloodied up” leg.

The driver of the Taurus, Mary Bouchard, and her 93-year-old passenger were transported to the Newburyport hospital for their injuries.

Police reported the driver of the Jeep runs a private day care. She was reportedly headed to a dentist appointment for one of the children in the car. Police also reported they are investigating the reasoning behind Cullen’s decision to put seven children in a vehicle that only contains five seatbelts.

The root cause of the crash remains under investigation.