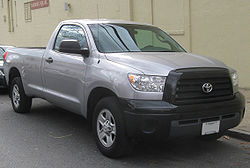 Danbury, CT – The driver of a pick-up truck struck a young boy and then fled the scene in the early evening of Thursday, July 29, 2010, as reported by News Times. The boy was left on the side of Stevens Street in critical condition.

The boy was struck down at approximately 6:15 p.m., according to reports. Danbury Police report they are looking for a tan Toyota Tundra, believed to have been manufactured between 200 and 2004. The truck has minor front-end damage to the passenger side.

Two witnesses reported the driver was male, according to Sgt. David Cooney.

Neighbors identified the victim as Eric Zhunio. He is believed to be about 6-years-old. The boy was transported to Danbury Hospital after the incident. A spokesperson for the hospital told the press the boy was in critical condition. He was then transferred to Westchester Medical Center in Valhalla, New York.

A witness reported the boy and his family had just gotten ice cream from a truck vendor when the boy darted into the road to get back to his house. The pick-up was travelling at “a high rate of speed” and never slowed after hitting the boy, according to the ice cream truck driver, Joe Esposito.

Esposito added, “He didn’t even hit his brakes.”

The boy was thrown approximately 20 feet.

Police closed the road as investigators worked the scene.

Danbury police want anyone who sees this suspect vehicle, or has any information on the event to call Officer Marcel Kruijs at (203) 797-4610, ext. 502.