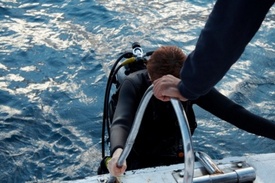 Neptune, NJ – A woman participating in a diving excursion Saturday, July 31, 2010, died from injuries sustained after she failed to resurface from a dive approximately 15 miles east of Shark River, as reported by The Star-Ledger.

The woman, whose name was not released pending family notification, was approximately 30 years old. She was aboard the dive boat Gypsy Blood, which is ported in Brielle.

An HH-65 Dolphin helicopter from Coast Guard Air Station in Atlantic City arrived to medevac the woman. Rescue personnel administered cardiopulmonary resuscitation to the woman before transporting her to Jersey Shore University Medical Center in Neptune. The diver was pronounced dead upon arrival, according to a Coast Guard spokeswoman.

The Gypsy Blood performs regular dives for groups or singles.

The Asbury Park Press reported the woman was exploring the Arundo, a WWII wreck in 110 to 140 feet, located in an area known as the Mud Hole. Neither the Coast Guard, nor the boat captain would comment on what caused the fatal injuries. Captain Jim Wilson simply stated, “It was a terrible accident.”