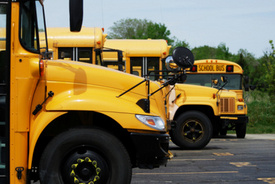 Allentown, PA – A three-year-old boy with autism was left alone, sleeping on a school bus for at least an hour Tuesday, July 20, 2010, as school officials failed to notice the boy missed his stop on the route to take children home, as reported by WFMZ.com.

Justin Styer attends summer classes at the Carbon Lehigh Intermediate Units. He is typically dropped off by bus at his home at 3:25 in the afternoon. The boy’s father explained, “time and time just kept going by until it was about 3:55, a good half hour after he was supposed to be home…We really started to worry.”

Justin’s parents called the school in search of their son. Those at the school were unaware the boy was missing, according to Justin’s father.

Over an hour later, the parents were informed that officials found the boy asleep on the bus.

The bus had finished its route and was parked in the lot. The windows were closed.

According to Justin’s father, “He was still sleeping inside an enclosed bus on this hot summer day. We got him back home and we took him directly to the emergency room, and so far, so good.”

Doctors told the parents to keep him inside for the next few days and to make sure he gets plenty of fluids.

“The CLIU is currently investigating all facts related to this very serius matter,” said Dr. Elaine Eib, executive director of the Carbon Lehigh Intermediate Unit. “The CLIU does not as a matter of practice share details of the results of internal investigations. However it does wish to note that the suggestion that the student was left unattended for over an hour appears at this stage of the investigation to be unsubstantiated.”