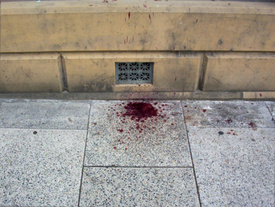 Staten Island, NY – An Arden Heights mother, whose twin sons beat a man to the point of unconsciousness, tried to prevent a witness from aiding the victim and then used a hose to clean the blood from the street, according to police. The Staten Island Live story reported Deborah Berardi, 55, told the female who tried to help the victim to “let him choke,” as he lied in a pool of blood.

The mother was unfazed by the entire incident, apparently, as an hour after the cleanup she was playing “Frontierville” on Facebook, posting her status as “needs hammers in order to complete a general store.”

She and her sons, Thomas and Anthony, 22, face felony gang assault charges in connection with the July 5 incident. Authorities reported the twins new the victim.

The victim, Beka Bekaouri, suffered a broken nose, a broken eye socket and a cracked skull, according to police. Police are still searching for the fourth person involved in the attack.

The brutal attack was sparked by an argument between Thomas Berardi and a group of people in a car with Bekaouri’s girlfriend, according to a police source.

When Bekaouri, who was not in the vehicle, approached to intervene, he and Thomas Berardi began to argue. Thomas punched Bekaouri in the face, according to police allegations, and was then joined by his brother Anthony and another accomplice in the assault. Bekaouri was beat into unconsciousness.

A female witness to the melee tried to help Bekaouri. Upon reaching the seizing man covered in blood, the loving mother that is Deborah Beradi pushed her away and told her to “let him choke,” according to court papers.

Then, Deborah Beradi pulled out a hose and washed blood from the street and from Bekaouri.

Bekaouri was transported to Staten Island University Hospital and treated for his injuries.

Ms. Berardi, on the other hand, told reporters that the allegations of her heinous actions were untrue. She explained, “The whole thing is wrong. Everything is wrong, it wasn’t that way, and that’s all I have to say. And we’ll straighten it out in front of a grand jury.”

Ms. Berardi was released from jail and returned to her home on Thursday, where she updated her Facebook.com profile, a status report from the game “Café World.”