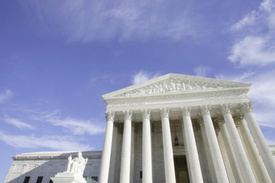 Baltimore, MD – A man who was shot by police in his home and his wife filed a lawsuit against three police officers, the Anne Arundel County Police Department and the county on Monday, July 12, 2010, alleging excessive force and civil rights violations, as reported by The Baltimore Sun. The suit was filed in U.S. District Court in Baltimore.

The suit stems from an incident on July 11, 2009 that led to him to be shot by an officer. According to court documents filed by Michael A. and Leah Housley, Anne Arundel County police officers showed up at the couple’s home and shot him as he cowered behind a chair after being pepper sprayed and hit with a Taser.

Police were initially sent to the home by a hospital because Leah Housley left the emergency room without being discharged. The woman told police she would come outside, but wanted to confine their 90-pound dog before she did so. Officers entered the home anyways, according to the Housleys. After a scuffle arose between Michael Housley and the police, an officer fired his weapon.

The suit comes less than a week after Housley was fined $500 by Anne Arundel County Circuit Judge Philip T. Caroom for hindering police by barring them from entering his home. In June, a jury convicted Housley of hindering police. The jury found him not guilty of the more serious charges that were brought against him though, such as assault.

While the lawsuit contains much of the argument that was used in his defense for the criminal case, it takes aim at the officer who shot Housley. The suit alleges Doyle Holquist Jr. was “not fit to carry out his duties as a police officer” and claims the department was negligent in keeping him on the force.

Housley’s lawyer argues Holquist suffered trauma from a 2007 shooting he was involved in, and later had professional and personal issues that should be made known in a civil case.

During the criminal case against Housley, police maintained Holquist shot Housley in a fight after pepper spray and two hits from a Taser failed to subdue him. Police claim Housley raised a chair against an officer. The defense explained Housley was cowering behind it.

Last week’s trial ended with Judge Caroom faulting both Housley and the officers. The judge laid more blame on the police for allowing the incident to escalate though.

Housley has noticeable scars from the shooting. He reportedly suffers constant pain from the bullet that shattered his jaw. He will also require surgery for his face, jaw and neck.

Housely is expected to appeal the conviction.

The Housleys’ lawsuit seeks unspecified damages for their compensation and to punish the county and police.