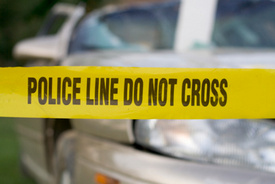 Darien, CT – A Darien woman died from injuries she sustained after crashing her car through two houses and a tree on Sunday, July 11, 2010, according to the Stamford Advocate.

Police reported that 30-year-old Whitney Smith was transported to Stamford Hospital after the accident occurred. She died early Sunday morning. No other injuries were reported but damage to the homes is substantial.

Police responded to reports of an accident on Hollow Tree Road at approximately 1:30 a.m Sunday morning. The BMW was reportedly traveling south when it struck a curb and bounded into the first-floor bedroom of the home located at 126 Hollow Tree Ridge Road. It then struck a tree and entered the rear area of a house at 122 Hollow Tree Ridge Road. The out-of-control vehicle came to a rest in the kitchen.

The first house was unoccupied at the time, but a family was sleeping in the second, according to Darien Police Sgt. Jeremiah Marron.

Police stated they believe excessive speed was a factor in the crash. Marron added that the car struck the second home’s chimney approximately seven feet off the ground.

The BMW was finally removed from the house at approximately 10 a.m. It was reported that severe damage to the home complicated the vehicle’s extraction. Marron said the Norton Heights Fire Department was ordered to demolish the chimney because of the hazard it presented.

Marron explained, “The problem that we’ve been facing is that there’s so much structural damage to the house that it’s in danger of collapsing. It’s been a little tricky trying to remove the vehicle. We have it out on the driveway on its roof, but it’s barely discernible as a vehicle.”