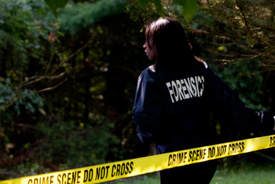 Pittsburgh, PA – A Pittsburgh woman was killed after a shoot out between masked men searching for drug money and police erupted inside her home Sunday, July 11, 2010, as reported by WPXI. Police continue to search for more suspects involved in the incident.

Police reported the shooting occurred at approximately 3:20 a.m. Sunday on the 2300 block of East Hills Drive.

Arika Hainesworth, 24, was inside her home with an 8-year-old boy when she called 911 and an associate to report masked men outside her home. Police reported when she let the group inside her home, shots were fired.

When officers arrived at the scene, over 40 shots were fired with the suspects.

Hainesworth was struck. The mother of two was transported to UPMC Presbyterian Hospital, where she was pronounced dead shortly after 4 a.m. Police said it was not yet clear who fired the shot that killed her.

Harper explained, “They do target single females, two or three kids possible, and they hide their drugs there…They don’t bring the drug trafficking to the house but for a safe haven or storage place.”

Police arrested one of the suspects so far. Richard Woodward, 19, was shot in the torso during the melee, but is expected to recover.

Police reportedly found 43 bricks of heroin in Hainesworth’s purse and the boy’s socks.

Officials have not yet released the names of the two others who were transported to UPMC Presbyterian Hospital for treatment.