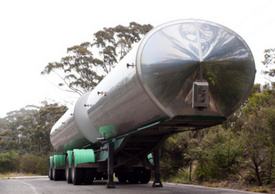 Woodbridge, NJ – A tractor-trailer carrying hazardous materials overturned on an exit ramp on Route 440 in Woodbridge Tuesday, July 6, 2010, prompting Haz-Mat teams from around the state to respond, as reported by the Star Ledger.

According to Detective Brian Polite, a NJ State Police spokesman, troopers were dispatched to the scene at approximately 2:45 p.m. The reports indicated an overturned vehicle and a leaking substance. Local Haz-Mat teams determined the substance was a chemical used in the making of perfume.

Polite reported a label inside the truck referring to its cargo stated, “highly flammable and a dangerous inhalant.”

The NJ Police’s Incident Management and Haz-Mat units, the Middlesex County Haz-Mat team and the Hopelawn, Woodbridge and Keasby fire departments responded to the accident to conduct a clean-up.

The overturned truck resulted in an hours-long traffic jam while emergency crews responded to the cleanup. The ramp where the spill occurred was the connector to Route 9, according to the Department of Transportation’s traffic alert web site. It remained closed until 7:30 p.m.

The driver of the tractor-trailer was transported to Perth Amboy hospital and treated for his injuries. All were deemed to be non-life threatening.

The cause of the accident is under investigation.