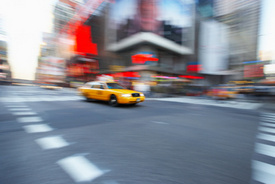 The crash occurred at approximately 11:45 a.m., at the intersection of 125th Street and Seventh Avenue.

Six people suffered serious injuries. The injuries were reportedly non-life threatening though, according to EMS workers. The other 13 victims suffered only minor injuries. All 19 were transported to Harlem Hospital.

Officials at the scene reported the ambulance involved in the crash was en route to an injury at Lexington Avenue and 125th Street at Randalls Island, when it was broadsided by an Acura at the intersection.

Witnesses at the scene reported the radio in the Acura was turned up so loud that the driver most likely did not hear the sirens.

After the ambulance was struck by the Acura, it swerved into oncoming traffic where it then hit an M100 bus and a Ford Expedition.

An investigation is underway.