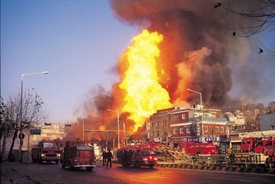 White Planes, NY – A five-alarm fire destroyed several stores in the downtown business district Wednesday, July 7, 2010, and resulted in 25 firefighters suffering from smoke inhalation, heat exhaustion and a few cases of heart palpitations, as reported by The Journal News. A civilian was also taken to White Plains Hospital for heat exhaustion.

The fire that destroyed a half block of businesses began in the basement of the Bengal Tiger restaurant at 144 E. Post Road. It then spread to neighboring businesses, including a popular Latin American café, a dry cleaners and a shoe store.

The fire was reported at approximately 5:30 p.m., and lasted for hours as more than 60 firefighters from White Plains and surrounding cities battled the blaze.

Fire Chief Richard Lyman reported 19 city firefighters were hospitalized for smoke inhalation and heat-related injuries. He also reported that six other firefighters from other departments were taken to the hospital.

He explained, “We were able to handle this fire quite well for the size of the fire…The heat definitely slowed the process.”

Public Safety Commissioner David Chong highlighted the obstacles the firefighters faced with an understaffed team though, explaining that every piece of fire equipment was dispatched between this fire and another across the city, and that all off-duty firefighters had been called back on. He stated, “We don’t have enough firefighters here because of the injuries,” referring to those suffering exhaustion and smoke-related illnesses.

The president of the city fire union, Joe Carrier, said the situation “is the perfect example of what happens when you don’t have the manpower.”

The fire was finally stopped at 9 p.m.

Red Cross and Salvation Army volunteers passed out water, ice and towels to the workers. A TransCare ambulance was at the scene to provide tired workers with air-conditioned busses. A local pizza restaurant distributed pizza to the workers as well.

The cause of the fire is under investigation.