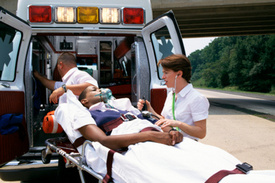 Staten Island, NY – A South Beach brawl on Sunday, July 4, 2010, sent two teens to the hospital with knife wounds and resulted in an investigation by the NYPD Hate Crimes Task Force, as reported by Staten Island Live.

The fight, which took place at approximately 8:15 p.m., by Capodanno Boulevard and Sand Lane, elicited a response from the Hate Crime force after one of the victim’s mothers said her son’s attackers made racially offensive remarks.

According to police, two African-American teens, aged 15 and 16, were approached by a group of five Hispanic males. A fight followed the confrontation.

Police reported the Hispanic males spouted off racial slurs at some point during the confrontation, but declined to reveal what the slurs were, specifically.

The victims were taken to Staten Island University Hospital, Ocean Breeze. The 15-year-old suffered slash wounds to his chest, back and left side. The 16-year-old suffered wounds deep enough that his liver was injured.

Police did not identify either victim and no arrests have been made as of yet.

Police have upped security around the scene of the fight. SI Live reported that federal authorities have been watching race relations on Staten Island since 2008, after four men waged a racially-motivated rampage on Election Night in response to Obama’s presidency.

Since then, a US Department of Justice representative has been present to monitor tensions.