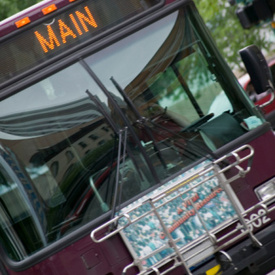 Baltimore, MD – Four Maryland Transit Administration passengers were injured when the driver crashed the bus into parked cars on The Alameda early Wednesday, June 30, 2010, as reported by The Baltimore Sun.

The bus hit one parked car on The Alameda, a street in North Baltimore that runs between Ramblewood and Waverly, and triggered a domino effect that damaged eight cars total. The collision happened at approximately 2:42 a.m., according to MTA spokesman Terry Owens.

Four passengers were transported to Union Memorial Hospital for treatment. Their injuries were deemed non-life threatening.

MTA officials and Baltimore Police reported they are conducting a full investigation into what caused the chain of events. According to Owens, preliminary reports suggest the bus driver either fell asleep or blacked out at the wheel. The driver will be subject to drug test, as it is standard procedure.