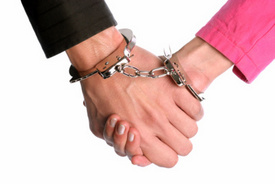 Hoboken, NJ – Two Jersey City citizens were arrested Tuesday, June 29, 2010, by Hoboken police after being picked up for complaints of public sex, according to The Jersey Journal. The two people had outstanding warrants.

According to police reports, officers found a man and woman on a stoop at Jackson and Fifth streets in Hoboken after they received a report of adults having sex in public.

When police arrived at the address at approximately 7 p.m., they found Jeffrey Mahon, 43, and Shiela Slaten, 59. The couple claimed they were simply sitting on the steps and not doing anything indecent.

Police reported no one in the area wanted to file a complaint after they arrived, so they ran a check on each alleged suspect. The background check found both parties had outstanding warrants.

Mahon had three warrants from Hoboken and Slaten had one warrant from Jersey City.

Mahon and Slaten were arrested and taken to the station for processing.

Upon arrival, Mahon found the need to stand on the chair where he was handcuffed and urinate on the fingerprint machine, according to police reports.

Mahon was taken to Hoboken University Medical Center to be evaluated. Somehow, he was cleared for incarceration, and later booked. He was charged with criminal mischief.

Mahon was transferred to the Hudson County jail on Wednesday, officials reported.