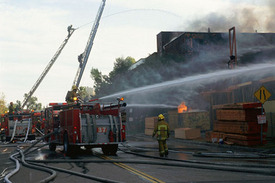 Paterson, NJ – A fire ripped through a home in Paterson, NJ on the morning of Wednesday, June 30, 2010, and resulted in four deaths and three injuries, as reported by WCBSTV. Investigators believe an electrical problem may have started the deadly blaze.

Firefighters responded to the emergency call for the home on 465 East 31st Street within two minutes, and arrived to see massive flames shooting through the roof. The flames quickly spread to the homes next door and damaged the sides.

One survivor, Ricky Hamerick, attributed his safety to his brother, who woke him up during the fire. Hamerick said his brother Darrell turned back into the house to get his girlfriend after he awoke Ricky, “And that’s how he lost his life.” His girlfriend, Tia Buckman, fell victim to the blaze as well, as she fatally jumped from a window.

Another person who jumped from the window suffered fractures in both legs and other severe injuries.

Another victim was Mark Smith, a third-floor resident. His family explained he was about to move out of the house and in with his sister.

Public Safety Director Glenn Brown reported three bodies in all were found in the remains of the house. He also told the Associated Press he believed all occupants of the house were accounted for.

Fire investigators said the building has a history of code violations.

A complete investigation is underway.

According to WCBSTV, The Red Cross is assisting the 11 people who were left homeless.