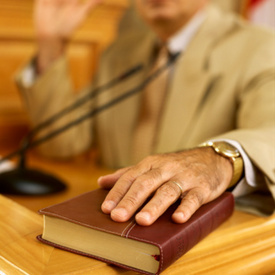 Sleepy Hollow, NY – A Sleepy Hollow police officer testified in US District court in White Plains, NY on Monday, June 28, 2010; stating he saw Detective Jose Quinoy punch and kick a man after he was handcuffed, as reported by The Journal News. The testimony is part of a civil rights trial stemming from a confrontation in late 2006.

Officer Michael Hayes testified to seeing Detective Jose Quinoy knock Mario Gomez to the ground with punches to the face. The fight stemmed from a personal dispute between the detective and civilian.

According to Hayes’ testimony, Gomez was handcuffed in the back of Hayes’ police car when Quinoy kicked him in the head on October 17, 2006. The conflict arose over belief that Quinoy, who was married, was courting Gomez’s 22-year-old daughter.

Quinoy is charged with violating the civil rights of Gomez and another man in two separate incidents in 2006. He is also charged with witness tampering.

Prosecutors plan to call Awilda Gomez, Jose’s estranged wife, to the stand. She reportedly witnessed the assault on Gomez.

While prosecutors stated they do not plan to call Gomez to the stand, Assistant U.S. Attorney Cynthia Dunne said, “That could change.”

The trial began on the week of June 21.