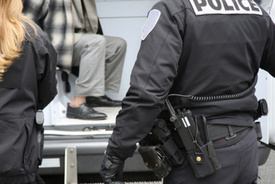 Brimfield Township, OH – A high speed chase from Alliance to Brimfield Township resulted in an officer being Tasered on Saturday May 8, 2010, as reported by FOX 8. The chase began after an employee of a local Circle K tipped off police to a possibly intoxicated patron.

According to Captain Doug Neeb, an Alliance officer saw the man make a turn without signaling and attempted to pull him over.

The driver stopped for a moment before changing his mind and speeding away. Alliance police formed a chase that reached speeds up to 100 mph at times.

Police dash camera video shows the suspect driver nearly crashing his car during the chase as he attempted to make a left hand turn. At that point, police decided to end the pursuit, citing too much danger.

Shortly after, a Brimfield Township officer sitting in a turn around on westbound Interstate 76 spotted the car and decided to follow without lights or siren.

The Brimfield Township officer managed to follow the car into a parking lot of a local motel and box the driver in.

The Brimfield dash camera video shows officers approaching the runaway driver’s car screaming for him to exit the vehicle.

Before the driver exits the car, Alliance officers run to the scene alerting the driver they have a Taser. The Taser is then shot and one probes hits the driver, 52-year-old Stanley Fowler, while the other hits an officer in the hand.

Both are seen on the ground, writhing in pain from the five-second burst of electricity.

Police reported the use of the Taser was necessary because Fowler resisted arrest.

FOX 8 went to the home of the driver in attempts to ask questions. Fowler admitted to being the driver of the vehicle but not to resisting arrest.

He reported to FOX 8 that he was unaware an officer was injured during his arrest.

Fowler was charged with OVI (operating a vehicle while intoxicated), resisting arrest and felony failure to comply.