Storms cause flooding, damage; at least 15 dead in MS, TN 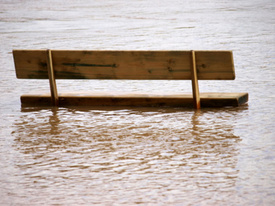 Nashville, TN – Severe thunderstorms flooded Tennessee and northern Mississippi over the weekend of May 1, 2010, causing highways to close, displacing residents and killing at least 15 people, as reported by CNN. The damage will require weeks of repair, according to Tennessee state officials.

The storms reached Georgia on Sunday night. The National Weather Service said the rain was forecasted to fall at approximately one inch an hour.

The Cumberland River, which flows through downtown Nashville, reached its highest level since a flood in the early 1960s. On Monday morning the river was expected to reach 50 feet, a height 10 feet above flood level.

Rescuers retrieved civilians who were inside their homes and perched on their rooftops as flood waters rose. Hospitals, schools and state buildings were not immune to the swelling rivers, and many were closed. More than 20 shelters were open around Tennessee. As the shelters reached capacity and turned stranded people away, they were met with the same people returning, saying rising floods would not allow for travel.

Almost all schools were closed Monday. State employees were expected to return to work, but the state’s largest building remained closed from the flooding.

The Tennessee Highway Patrol provided food and water to stranded drivers on Interstate 40. Approximately 91 trucks became stranded on eastbound I-40, between mile markers 192 and 196. While the rig drivers were offered assistance in evacuating the flooding road, all 91 drivers opted to stay with their trucks.

Inspections are expected to occur, Monday, May 3, 2010. The American Red Cross reported approximately 800 people were residing within the shelters set up throughout the states.

Mississippi officials reported four deaths: two in Benton County and one each in Lafayette and Union counties. The counties are located in the north-central region of the state.

In Nashville, bodies turned up in flooded houses, an overturned vehicle and elsewhere.