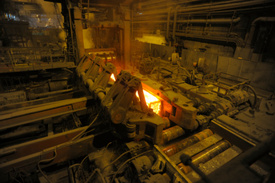 According to the OSHA press release, Service Manufacturing Group was cited for 12 violations of safety standards in March 2009. The cited company agreed to correct the hazards but apparently failed to submit proof of abatement. The follow up inspection in October 2009 found only four of the 12 violations had been corrected, leaving eight uncorrected.

In result, OSHA has issued eight failure to abate notices, carrying $100,500 in fines. The issues that require addressing are uninspected overhead cranes, lifting slings and fire extinguishers; missing gauges that are used to ensure proper air velocity in paint spray booths; failure to electrically interconnect containers while dispensing flammable liquids and failure to evaluate employees’ fitness to wear a respirator.

The latest OSHA inspection further found the plant failed to close unused openings in electrical boxes and cabinets, lacked an educational program on fire extinguisher use and limitations, and did not post the previous citations in the workplace. For these new offenses, OSHA issued a $3,000 fine for a repeat citation, a $1,500 fine for a serious citation and an $1,800 charge for a second serious citation.

Service Manufacturing Group has 15 days from receipt of the citation and proposed penalties to either meet with the OSHA area director, comply with the penalties and recommended modifications or contest the findings before the review board.

Under the OSHA Act of 1970, employers are responsible for providing safe and healthful workplaces for employees. OSHA’s role is to assure these conditions for working men and women by setting and enforcing standards and providing training, assistance and education.