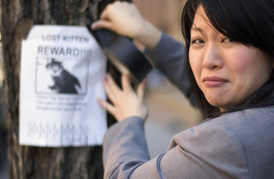 Legal news for Massachusetts personal injury attorneys – Two neighborhood cats had to be euthanized after they were found doused with gasoline; owners distraught.

Neighbors whose cats had to be euthanized suspect fellow neighbor of torture.

Quincy, MA (www.NewYorkInjuryNews.com) – People in a North Quincy neighborhood believe someone or some people are torturing and killing cats with gasoline. Two felines had to be euthanized after their owners found them covered in gas, as reported by The Boston Channel.

The cat owners believe the culprit is a neighbor.

Jill Reamers’ cat, Cocoa, was found by her daughter in the front yard of their home Thursday, April 22, 2010, dazed and covered in gasoline.

Reamers gave her cat several baths in attempts to rid the cat of the toxic fuel, but to no avail. The gas had already seeped into the cat’s skin and nervous system. Cocoa was put to sleep three days later.

Reamers’ neighbor, Heather DeLong, found her cat covered in gasoline on Thursday as well. The two cats were neighborhood friends, apparently, and could often be seen lounging together on the front porch of Reamers’ house. DeLong’s cat Gemini was also given several baths in attempts to help her survive. The cat was in excruciating pain though, and was euthanized.

The Massachusetts Society for Prevention of Cruelty to Animals, (MSPCA) www.mspca.org, is offering a $1,000 reward for information leading to the conviction of the person or persons involved.