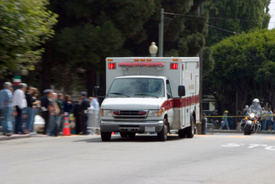 Legal news for Connecticut personal injury attorneys – A seventeen-year-old boy was rushed to the hospital on trauma alert after he was found bleeding from the head and unconscious.

Few details are available on an altercation that left a teenager in critical condition.

Shelton, CT (www.NewYorkInjuryNews.com) – Police found a seventeen-year-old male incoherent and bleeding from his nose and ears, Thursday, April 22, 2010, after receiving reports of a street altercation from passers-by, as reported by The Valley Independent Sentinel.

Shelton police believe the 17-year-old was assaulted by three other teens shortly before 5 p.m.

The three others who were believed to be involved in the assault initially fled the scene, but reportedly returned to cooperate with authorities.

The unidentified teenager was rushed to Yale-New Haven Hospital, and reportedly in critical condition. Reports from Thursday stated the hospital was put on trauma alert by the ambulance transporting the teen to the hospital, meaning the patient faced potentially life-threatening injuries.

Shelton police are investigating the incident. As of Friday, April 23, details were limited.

Police reported that no weapons were used, but did not clarify how exactly he was hurt.

In an update on Friday morning, Sgt. Robert Kozlowsky told reporters, “Police were able to locate several witnesses to the incident. Police believe the individuals involved in this altercation are known to each other and this was not a random incident.”

Police are asking for help with the investigation and telling anyone with information to call the department at (203) 924-1544.