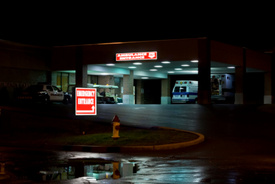 Legal news for Pennsylvania wrongful death attorneys – A woman who was being transported to the Turtle Creek PD was rushed to the hospital for chest pain and died.

Turtle Creek, Pennsylvania (www.NewYorkInjuryNews.com) – An East McKeesport woman died after being rushed to a hospital from the Turtle Creek police station early Sunday, April 18, 2010, as reported by www.wpxi.com. The woman’s husband is questioning authorities and waiting on an autopsy.

At approximately 1:30 a.m., Sunday morning, Anita White, 46, was driving her husband’s truck without a driver’s license. An East Pittsburgh officer pulled her over on Ardmore Boulevard. The woman had reportedly been driving erratically.

Upon finding the woman was driving without a license, the officer had White’s vehicle towed and offered her a ride to a safe location, away from the road. White refused the ride and decided to walk.  Police later found White walking down a dangerous area of the city and stopped to put her in their patrol car.

Authorities claim White was combative and argumentative, but no force was used on the woman. When White complained of chest pain, an ambulance was summoned to meet the police and woman at the Turtle Creek Police Department.

East Pittsburgh Police Chief Lori Payne, the officer in charge of questions related to the case, reported that the woman passed out in a jail cell while waiting for the ambulance, which resulted in a large abrasion on her face. Payne said the fall was caught on tape.

Mrs. White was pronounced dead at the Forbes Regional Hospital in Monroeville shortly after arriving.

Edward Wright said not a single officer called him to relay information of his wife’s whereabouts or condition. He told reporters, “I sat in the house and I waited for her to come to the door.” He apparently did not find out about his wife’s death until contacting the emergency hospital himself.

The case has been turned over to the county for further investigation.