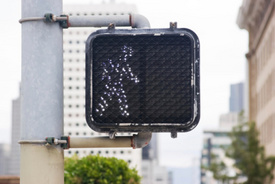 Burlington, VT (www.NewYorkInjuryNews.com) – Two people were injured Monday, April 19, 2010, after a driver stopped against a green traffic light at a cross walk to let two girls cross the street, causing a collision between an oncoming motorcycle and the two pedestrians, as reported by www.wcax.com.

According to police reports, two girls were on the side of the street, waiting at the crosswalk on North Avenue by Farrington Trailer Park at approximately 6 p.m. A vehicle, in attempts to aid the girls on their journey, stopped against the green light and motioned for the two girls to go ahead.

The two girls took the driver up on his offer and went for it. Upon doing so, a motorcyclist traveling in the opposite direction of the stopped vehicle hit one of the two teenage girls.

The motorcyclist was 21-year-old Jimmy Huynh of Burlington. He was thrown from his motorcycle and thus sustained minor injuries. The 13-year-old girl who was hit by the oncoming bike was thrown to the ground and sustained non life-threatening injuries.

Authorities said the driver of the vehicle who stopped against the traffic light for the girls, which caused the chain of injurious events, fled the scene. As of Tuesday, April 20, 2010, there was no new information on the possible identity of this erroneous driver.

This incident has Vermont officers reminding pedestrians and drivers alike that rules for the road are there for a reason: to prevent completely avoidable accidents.