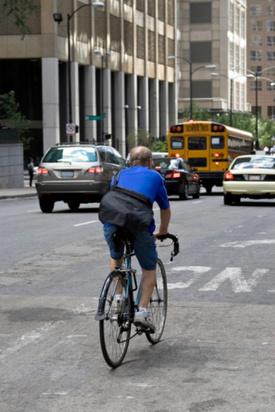 Legal news for New York personal injury attorneys: A July 2008 incident where an officer body-checked a Manhattan cyclist has led to a $1.5 million lawsuit against NYPD.

New York City, NY (www.NewYorkInjuryNews.com) – A cyclist who was knocked off his bike in July, 2008 filed a $1.5 million lawsuit in Manhattan Federal Court Tuesday, April 13, against the New York City Police Department, as reported by PIX 11 News.

Cristopher Long, 30, is claiming the NYPD tried to cover up the July 2008 event in which he was assaulted by a police officer.

Long was arrested in July 2008 during a Critical Mass ride through Times Square. Critical Mass is a cycling activist group that focuses on drawing attention to the alternatives of motor vehicles. Long was apparently body checked by police officer Patrick Pogan during the event and knocked from his bicycle.

A video of the body-check was posted on YouTube though, showing Pogan tackling the cyclist to the ground. Pogan arrested the cyclist for assault, resisting arrest and disorderly conduct. Police said Long was obstructing traffic and deliberately steered his bicycle into an officer. Charges were later dismissed.

After the incident, Pogan was stripped of his badge and gun and assigned to desk duty. In February 2010, he was reportedly fired for making false police reports.

The New York City Police department has yet to comment on the case.